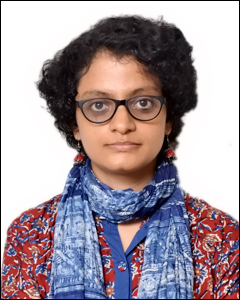 Bhumika R completed her PhD from Jawaharlal Nehru University, New Delhi in 2019. She has previously worked as an Assistant Professor of English at Jain (deemed to be) University, Bangalore and as a Language Instructor in the Department of Humanities and Social Sciences, Indian Institute of Technology Jammu.

Her research interests include, literature and culture from South Asian Borderlands (specifically Northeast India), literature produced in conflict spaces, everyday life, self-narratives, postcolonial studies and gender studies. She is currently working on the everyday life practices and narratives of identity of the American Baptist Foreign Missionary Women in the colonial provinces of Assam and Burma.

Bhumika has publications in reputed journals such as Asian Ethnicity (Taylor and Francis), IACLALS, Seminar and Mizo University’s Literature and Culture Studies. She has contributed book chapters in three edited books (two of which are forthcoming) to name a few. She has published articles in Cafe Dissensus Everyday and has also guest edited the March 2020 issue of Café Dissensus. She has presented papers in several national and international conferences at the University of Hyderabad, Jawaharlal Nehru University, North Eastern Hill University, English and Foreign Languages University, Jamia Millia Islamia, Association for Asia Studies at Academia Sinica (Taipei, Taiwan) to name a few. She has also given a talk at the refresher course organized by the Department of English, Centre for Postgraduate Studies, Bangalore University and has also delivered a talk at the Scholars at the Peripheries Research group which is headed by Prof. Mario I Aguilar of St. Andrews University, Scotland.

Her non-academic writings include poetry and short fiction in English. Some of her poems have been published in the Visual Verse and platocavesonline and her short stories have been published in the borderlessjournal and eastindiastory. She has contributed articles and reviews to The Hindu and Deccan Herald newspapers. She has also translated  Irom Sarmila’s poems into Kannada. She has read her poems in several open mic events in New Delhi and Bangalore.